The project foresees involving the Local Social Action Council (CLASO), a legally regulated structure composed of more than 70 entities with intervention in the social field.

The project will support the creation of a Municipal Plan for Non-Discrimination, as a public policy for the promotion of human rights and social inclusion, providing a response to tackle growing radicalization of political discourse and fomenting of hatred and intolerance towards some community groups, among which there are no dialogue spaces.
The Plan, in its different phases, will have the participation of a Citizens' Panel, composed of representatives of groups victims of discrimination.

The project aims to combat discrimination based on racial and ethnic origin, nationality, culture, religion and sexual orientation, to which foreign communities, Roma and others have been subjected, compromising their integration in the local community. The challenge is to create a Citizens' Panel, representing the diversity of discrimination victims, in order to articulate opinions and experiences, resulting in concrete contributions to design, promote, monitor and evaluate the Municipal Plan for Non-Discrimination. Thus, the project aims to expand the civic and political skills of these communities, create spaces for dialogue, consultation and participation, provide a voice to these groups and foster social organisation and their empowerment.

The project involves four key target groups:
i) Citizens' Panel, represented by different communities that are victims of discrimination, who will actively and permanently participate in the project. They will take on the role of facilitators of the Plan in their communities, in all the planned stages, as well as being the face of the public communication campaign;
ii) Groups victims of discrimination, who will be covered by the work developed by the Panel in their respective communities;
iii) Political decision-makers, public and private entities involved in the actions to be defined in the Plan;
iv) Local society, in a logic of involvement and awareness of the wider community, promoting a culture of non-discrimination.

The project foresees the following activities:
- Creation of a CP. This will be composed of 12 representatives of groups that are victims of discrimination and its mission will be to stimulate a process of community debate on the different forms of discrimination and the priorities for political action to be included in the Plan;
- Training the members of the CP, using non-formal civic education approach, on the methodology of preparation, approval and evaluation of the Plan, as well as on rights, duties, local institutions, local policies;
- Carrying out a process of public consultation of the community on (i) the different forms of discrimination experienced at local level, particularly in the access to employment, housing and essential public services (health, education, security...); (ii) the priorities for action in the fight against these forms of discrimination;
- Drafting and approving the Plan, contemplating the axes of action, the intervention measures, the governance and evaluation model;
- Undertaking a public campaign to publicize the Plan, through the production of promotional materials, public sessions to present the Plan in schools, companies, associations and citizens' groups, the media, among other entities;
- Production of a Methodological Guide to support other municipalities interested in implementing a project of this nature.

The project's main results will be:
(i) create a local policy for combating discrimination (Municipal Plan) lasting 4 years, which the Municipality and the entities and groups in the territory will have to implement;
ii) institutionalize a space for regular dialogue between groups which are victims of discrimination and between these and the territory's institutions - the CP. This will initially be directed towards the creation of the Plan and will continue with the functions of monitoring and evaluating its implementation;
iii) contribute towards a more socially cohesive and civically active community, capable of understanding and valuing its internal differences, as well as building collective action;
iv) create a methodological guide to disseminate the project in other territorial.

The project foresees the creation of a municipal public policy to combat different forms of discrimination. This policy - a Plan valid for 4 years - will be defined by: i) creating spaces for community dialogue, in particular with groups that are victims of discrimination; ii) addressing the divergences and common problems to these groups; iii) collectively defining the priorities for action to fight against discrimination; iv) actively monitoring the implementation of measures and evaluating the Plan.
For these reasons, the project represents an exercise in strengthening citizenship, social and political participation at community level, giving voice and power to discriminated groups and aiming to produce direct impacts on the improvement of living conditions.

The project team was also responsible for preparing the diagnosis and social development plan of Olhão. In this context, it was possible to confirm the existence of social groups who were victims of discrimination, who had their citizenship rights diminished, who had no voice, power or trust in society and institutions.
The Oficina Association defined as priority areas of action the promotion of participatory democracy and the planning of inclusive public policies. This project brings these two areas together in a very coherent way – the participatory design of a municipal policy to combat discrimination.
The Association believes that this is a possible way to combat civic deserts, build collective action and strengthen democracy.

We appreciate all comments and advice that help us to improve our project. References of other experiences and projects developed by registered members in the idea space will be equally welcomed by us. We want to learn from the collective.

During the several sessions made with our Citizen's Panel we have discussed several measures, solutions and activities that could be done to mitigate or discourage discrimination forms in our society.

All those considerations led to the production of a report that has two essential chapters: i) participatory diagnosis of discrimitation; ii) measures and solutions to mitigate discrimination.

Those solutions have been successfully delivered to the Equality Team of the Municipality in order to be part of Olhão's Municipal Plan for Equality and Non Discrimination.

Are you sure you want to delete Citizen's Panel measures and solutions will be part of the Muncipal Plan?

On the 13rd of October we gave the first step towards our awareness raising campaign against discrimination.

Some of the elements of our Citizen’s Panel were very happy to give their testimonial in front t of a camera. They will be part of a series of short videos to be disseminated through social media to raise alarm for situations and challenges that some groups of our community face on a daily basis.

Are you sure you want to delete Awareness Raising Campaign is moving forward?

Discrimination diagnosis has been submitted

During our work with the Citizen's Panel, several situations of their daily lives have been shared. This sharing was very useful to create a diagnosis of the discrimination in the territory of Olhão. Where, how, and why it happens, were the main questions we were trying to answer.

Once we have finished our sessions and individual interviews, we have produced a report with discrimination diagnosis based on the situations experienced by the people that willingly shared their views and experiences.

This document has been sent to Olhão's Municipality team and has been incorporated in the Municipal Plan for Equality and Non-Discrimination.

Are you sure you want to delete Discrimination diagnosis has been submitted?

In order to explain the methodology behind the project, we have produced and released a small video explaining the journey: from the idea, the setting up of the Citizens' Panel, the discussion around the theme of discrimination, gathering ideas to tackle it and final aims.

Link to the video

Are you sure you want to delete Olhão + Equal methodology now available in video?

Citizens' Panel has mapped discrimination and searched for solutions

On the 29th of June we have held another Citizens’ Panel session to make a balance of what has been discussed throughout the last months.

The methodology applied focused first on identifying specific discrimination situations. On a second stage those situations have been categorized according to specific typologies, such as access to:

Once the diagnosis was ready the Panel focused on the search for solutions, which has proved to be quite a challenge, because many times is just difficult to change mentalities and constructed erroneous ideas in a short period of time. Nevertheless, everybody has agreed that these topics need to be bring forward, so people can reflect on and act. The solutions discussed gravitate around the necessity for awareness raising, capacity building and creation of new services to support people that suffer discrimination situations.

Are you sure you want to delete Citizens' Panel has mapped discrimination and searched for solutions?

Citizens' panel started mapping discrimination in the municipality of Olhão

As part of the Olhão + Equal project, a panel comprising citizens representing groups that traditionally experience situations of discrimination was set up.

The first session took place on the 5th of May in the multipurpose room of Casa da Juventude de Olhão. Several people reflected on their experiences and shared with the group situations, which due to intrinsic characteristics such as skin tone, accent, culture, nationality, physical appearance and sexual orientation, were treated "differently", diminished or deprived of their fundamental rights as provided by Portuguese law. As mentioned, it is not enough to have legal diplomas, it is necessary to raise awareness and seek ways for them to be fulfilled.

In the next sessions we will continue to document, map and diagnose these situations and also propose measures, actions and improvements that can somehow contribute to the elimination of discrimination. 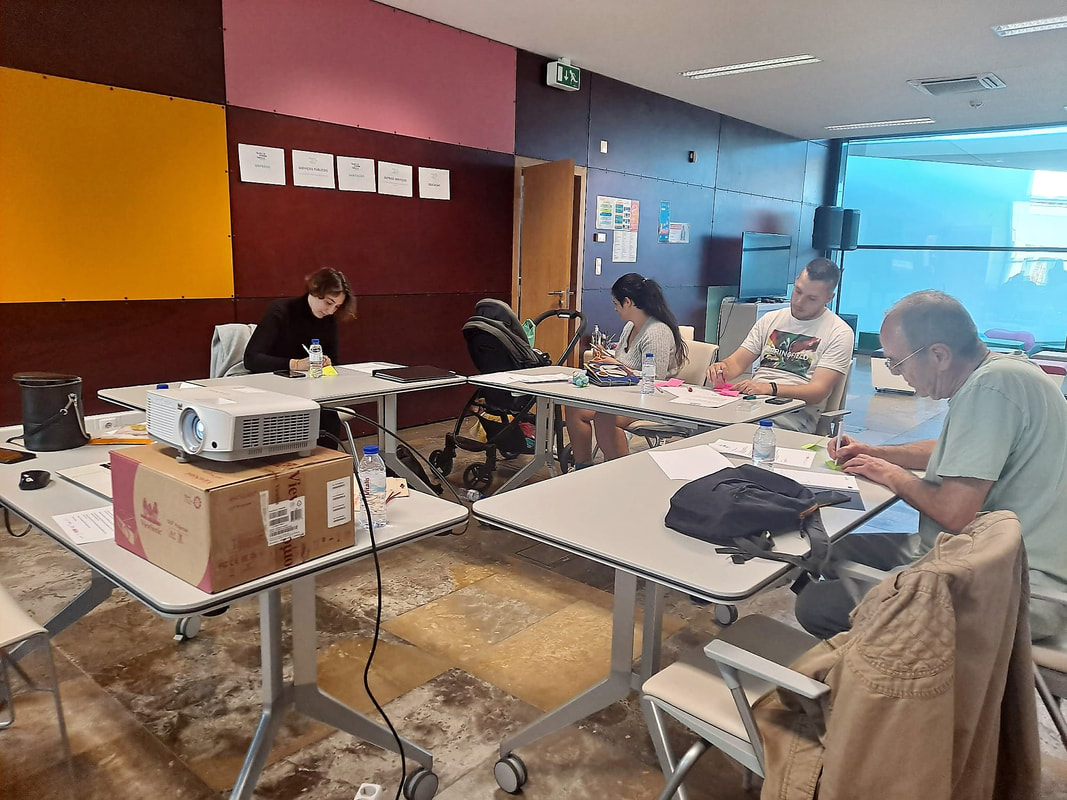 Are you sure you want to delete Citizens' panel started mapping discrimination in the municipality of Olhão?